Since we were kids, we’ve seen bathtub drain stoppers when we’re taking a bath. We’ve toyed with them with our tiny hands and feet, but we never thought of asking what they’re for beyond keeping the water in the tub. Did you know that there are more than a few types of bathroom drain stoppers available?

Bathroom drain stoppers come in different sizes and designs. The main difference between them is how the stopper opens and closes, this is usually either using a lifting, turning or pushing action. Some stoppers have a level you can turn or lift, some even allow you to push open and close using your feet without having to bend over.

Let’s take a look at the various drain stoppers for your bathroom needs.

The lift-and-turn stopper can easily be identified by the small knob found on its cap. This knob lets you open and close the stopper easily using a twisting motion. If you lift the knob and turn in one direction, it will open up. If you turn it the other way, it closes down.

It’s also super easy to install this type of drain plug. Just screw the center set screw into the drain crossbar’s threaded center. Take care not to screw it on too tightly, as this can leave it stuck in that position.

It’s also easy to maintain. It is designed for minimal care. Just pull the plug every now and then to get rid of the debris from the drain, wipe, and rinse. 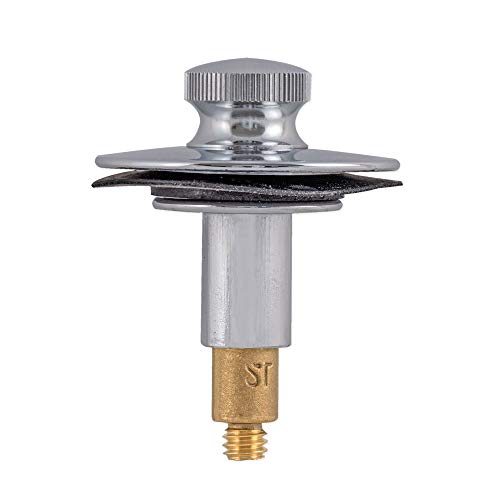 This type of drain stopper is similar to the overall look of the lift-and-turn stopper. This is also installed in the same manner, using a set screw to install the body with the drain.

The main difference between the two lies in how you operate them. For this type, you have to push and pull it to open and close the drain. This simple design is not just easy to use, but also easy to clean.

This model has some similarities with the push-and-pull drain plug. It is installed similarly to the first two types we’ve mentioned, with the addition of a spring in its design.

Using this drain stopper is very easy. Push down the stopper using your toes to open and close the drain. It is also quite effortless to clean and maintain. One downside, however, is that the spring is bound to wear out over time, so you’ll need to replace it eventually.

Even without tools, you can install this type of drain stopper in either corner or regular bathtubs. Install the stopper into the drain. It is equipped with rings that keep it steady in place and ensure an excellent seal. To operate it, you only need to move the toggle lever sideways to open or close the drain.

Find tub and shower parts for your home

This model is one of the types of drain stoppers that use levers on their overflow plate, right in front of the tub. Instead of a visible pop-up drain stopper, though, you get a strainer in the drain opening. One big difference of this type compared to the others mentioned here is the difficulty of cleaning and maintenance. To clean this stopper, you’ll need to take it out of the overflow tube and plate.

Not everyone is a fan of levers, and if you are one of them, you can go with the alternative variant. This uses a twist cover on the overflow plate instead. You only have to rotate its twist cover to open or close the plunger.

The pop-up drain stopper can be confusing for first-timers, since it resembles part of a traditional bathroom sink’s pop-up drain, design-wise. Even with the way they are operated, you can find similarities. It also uses an overflow plate and lever. This is commonly used in lavatory sinks than it is for bathtubs.

By lifting this lever, you move the attached rod in the overflow drainpipe, which rotates the rocker arm attached to the pop-up drain stopper. The rod houses’ rear end has a spring that allows the rocker arm to control the stopper.

This particular design is quite efficient at trapping dirt. But then, you’ll need to take out the parts of the drain stopper when it’s time to clean it and remove the dirt. The process of removing the components via overflow pipe and drain can be quite complicated.

As we mentioned earlier, there are a number of steps required to handle flip lever stoppers. This is mainly due to their design, which is fixed to a linkage arm that has to be removed at the same time from the opening. Follow these steps:

Push-pull models look similar to toe-touch stoppers, but these do not have springs. To remove them, follow these steps:

More of a visual learner? Check out this video tutorial instead!

Drain stoppers are essential items in the bathroom. They not only allow you to enjoy baths, but they also prevent having messy floors. Choosing the appropriate model for your tub’s drain opening is very important. We hope this guide has been helpful!