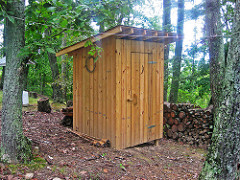 Indoor plumbing changed the course of human history. It’s no exaggeration to say that the invention of a plumbing system that could service an entire city was one of humanity’s greatest advancements. Nowadays, you generally have to travel to some of the more impoverished locales around the world to find a toilet that doesn’t utilize plumbing.

Well, maybe not. As I’ve talked about on our blog, I grew up spending summers in the remote woods of Minnesota and for years used an outhouse before later using a composting toilet.

While we most recently upgraded by adding a septic tank and a compact flush toilet for my parents, we still rely on a waterless toilet in a remote yurt that we have on the edge of the property and we still use the composting toilet when we have a lot of visitors or parties where the small septic system wouldn’t be able to handle such a large volume of waste.

Also, in recent years, a trend has been growing in popularity and it involves a move away from toilets that require a plumbing system, or water at all. Far from indicating poverty, though, these portable and dry toilets are the result of two new related movements: Tiny Homes and living off the grid.

There are a variety of toilets that don’t require plumbing, all suitable for different living arrangements, so let’s take a closer look at a few examples.

Why go without waterless?

The first question you may be asking is, “What’s the point of this whole waterless movement?”

Sounds like some hipster nonsense, right? Not at all, actually.

There are many reasons that are motivating people to cut the cord (or pipes) and go waterless. The people who are jumping on this trend represent the spectrum of political and socioeconomic backgrounds.

For some, this move towards dry toilets is a result of the pursuit of a minimized environmental impact. For others, it’s their high water bill. Then there are those who simply want to take a break from city life and go “off the grid.”

The tiny house movement, more than just a reality TV fad, is the nexus of all of these motivations. People who want to take up less space, use less water, pay less for utilities, and get away from the hustle and bustle of big city living have been embracing tiny homes. These miniature houses are often not set in fixed locations and require homeowners to get creative with how they conserve space. Enter the waterless toilet. 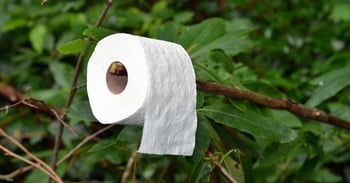 Composting toilets are nothing new. In fact, in a technical sense, the very first toilets were composters. Using natural heat and bacteria to rid your home of its waste is a common practice, and for all intents and purposes is how septic tanks work.

Self-contained composting toilets, often known as “dry toilets,” are waterless and work without additional sewage systems. Some require, at the very least, the installation of a ventilation pipe, while others are completely portable and can be relocated as needed.

Here’s one of the two composting toilets we have on our property (and have had for 30+ years). This is an older model of the SunMar Ecolet.

I don’t think this exact model is still available although Sunmar is still one of the well-known brands and has newer models like this one. The one main problem we had was that the tray that captures liquid (pee) would overflow  – this mess is definitely one of the potential disadvantages of composting toilets. We eventually fine-tuned the composting cover and prevented the problem but the pee tray overflowing is one of the complaints I’ve read about from other owners of these.

*One of the most important keys is using the right kind of cover material (and enough of it) to keep the mixture being too wet – and pee leaking out.

However, out of fairness to the brand, this problem of the urine container overflowing is a common complaint across brands, including the very highly-rated Nature’s Head composting toilet.

In the former case, there is the Separett Villa 9200, a state-of-the-art composting toilet that is ideal for compact spaces or rural homes. This Swedish-made toilet is the pinnacle of self-contained composting toilets and has gained a great deal of exposure thanks to its prevalence in so-called “Tiny Homes.” This battery-powered toilet can cost in the range of $1000 or more. Check the current price of the Separett Villa on Amazon.

The Villa 9200 doesn’t have a separate waste chamber but instead collects the waste in a compostable bag which is removed after many uses. This unique toilet also has a ventilation pipe and a fan to jettison the unpleasant smell associated with doing your business. Other features include a design that keeps urine and solid waste separated and a touch-sensitive seat that covers the waste compartment when it isn’t being used.

Slightly less high-tech but far more portable is the Dry Flush by Laveo. This is an American-made composting toilet that, like the Villa 9200, doesn’t have a separate waste chamber but instead collects the mess in a bag within the toilet itself. Instead of having external ventilation, the Dry Flush double wraps the waste in a special bag that completely seals in the smell. This toilet is cheaper than the Villa 9200, coming in at under $600.

The Dry Flush system on the Laveo is very unique and actually kind of bizarre the first time you see it in action, it looks like something you see on a spaceship. Here’s a quick video that starts right where the “flush” starts and you can see how it totally wraps the waste inside the bag similar to a pet genie dog waste system.

See our detailed comparison between the Separett Villa 9200 vs. Dry Flush by Laveo.

Both the Villa 9200 and Dry Flush are ideal composting toilets for those who want to be environmentally conscious and don’t want to be constrained by plumbing systems. The former is better suited to fixed locales, while the latter is useful for those who are more mobile. You can read a more thorough comparison of the two toilets here.

While composting toilets have been garnering considerable attention of late, they are hardly the only solution for those seeking to go without a plumbing system. RV toilets, which are common in campers, aren’t entirely waterless, but they do use less water than a normal toilet. RV toilets use a waste tank, so they’re a bit more work than a composting toilet, but they are ideal for anyone traveling in a vehicle that’s doubling as a home.

One of the most popular RV toilets is the Thetford Aqua-Magic V, which is affordable and is compact enough to fit in almost any recreational vehicle. Thetford is a well-known name that also makes portable camping toilets that are useful for RVs and camper vans.

If you’re looking for something a bit more dramatic, you could consider an incinerating toilet. As the name suggests, these toilets burn the waste instead of allowing the more time-consuming process of composting. The toilet bowls are stainless steel and feed into a combustion chamber where the waste is then fire-roasted into ash.

The Cinderella incinerating toilet is one of the most popular in the world, but also has a price tag that will run you almost $5000. In many ways, the Cinderella resembles the Villa 9200. It has an internal container that collects the waste and a ventilation shaft that requires basic installation.

The one thing that might give some homeowners qualms about buying an incinerating toilet (other than the price) is the energy use. Burning waste requires considerably more energy than natural composting, regardless if you go with the classic electrical design or the gas-powered versions. An incinerating toilet is perhaps a useful alternative for some forms of remote living, but it will hardly be much of a money-saver.

These are the most common and versatile alternatives to central plumbing. Of course, there are also always porta-potties and outhouses, but those are probably far less enticing to people who are trying to minimize their square footage (or don’t want a bathroom on their lawn).

The fact is, whether you’re merely looking to reduce your water bill or are in need of an escape from the world, there are plenty of options available. Look into what fits your budget and lifestyle and the right toilet will be out there.

Note that although you don’t need any water pipes, you will need to vent it with an exhaust pipe to the outside (PVC pipe)