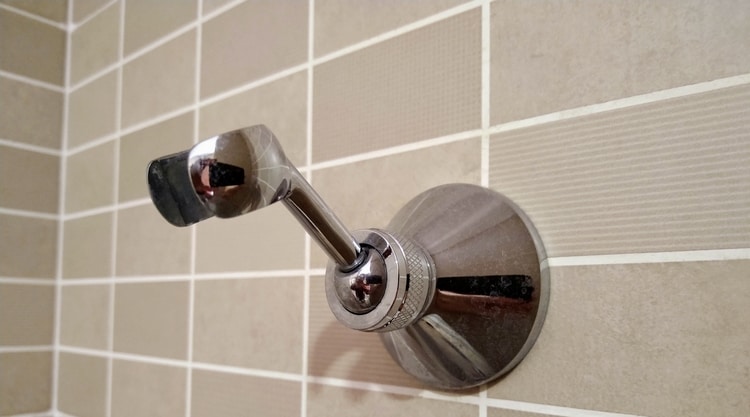 2021 Update: After nearly 4 years, I’ve gone through 3 different shower head brackets that use either suction or adhesive (not screws). One was total junk, the other held up for 2 years and the 3rd has been up for 18 months and still holding strong.

Summary – there are a lot of plastic models on the market that are cheaply made and a waste of money. But if you really do NOT want to drill into your shower tile, they can be a decent option. After three attempts, the key is finding one with a good adhesive that is well built.

The main difference between the previous two models is the whole thing is metal, not plastic (the ball that the mount swivels on, the support for the showerhead, and the mounting plate are all metal). I no longer see this exact model online anymore but this one is the most similar one I can currently find online. It uses adhesive (not a suction cup).

Unfortunately, most of these suction cup brackets are cheaply made by unknown online brands that come and go. I have yet to see one of these made by well-known bathroom accessory brands such as Moen, Kohler, or Grohe. These brands all make quality shower heads and accessories but they are screw-mounted, I have yet to see a suction model from any of these top bathroom brands.

At this point, I’ve spent about $45 and had to toss two of them. In hindsight, I would probably just drill into the tile and properly mount the bracket but if you really don’t want to drill or cannot drill into your wall surface, they can be a decent solution. The one with the suction cup was the worst of the three, the other two used a strong adhesive that came with the kit (just a peel-off backing).

We recently remodeled our bathroom, unfortunately, the first thing to go was the shower head holder or bracket that held it to the wall.  Although I looked professional with a chrome finish it was really just cheap plastic and ended up breaking after less than 6 months.

The shower head itself is very good quality from a very reputable bath accessories company. It was just the bracket that was cheaply made. I was surprised that such a cheap holder was paired with a quality shower head. Anyway, because of that we still wanted to use it we just wanted to replace the bracket or holder that kept it on the wall.

The holder had been drilled into the wall so when I replaced it left holes in specific spots I tried to find another holder with the same dimensions but was unable to. I decided to patch the existing holes and drill new ones to match the new shower head holder. However, my wife was totally against the idea of drilling new holes. So, the only other option was to buy a suction cup shower head holder to fit our handheld showerhead.

I really didn’t think these suction cup holders would work since it seems unrealistic or unlikely that they would hold a weight of our heavy handheld showerhead the shower head has multiple functions and weighs quite a bit so I just assumed that the first after the first few tries it would just fall down. I had had some bad experiences with cheaply made suction cup grab bars and bath caddies that didn’t really stick to the shower tile.

While I think the quality has gotten better in recent years, many of these suction cup holders bath devices I bought were made out of kind of cheap looking plastic weak suction strength, I really hadn’t had good luck with suction cup bathroom devices in general.  But since I really didn’t have another option since my wife didn’t want new holes drilled I decided to look online and see if I could find a quality suction cup holder for the shower head.

After reading a ton of reviews I decided (discontinued) mostly because the handheld showerhead we have and wanted to continue using has a pretty wide handle and just from the photos, it didn’t look like it would fit most of the suction cup brackets I found. (in hindsight I probably spent way too much time researching this purchase considering how inexpensive gadgets are!

A lot of them have a very small opening even though they claim to be a universal fit for all types of shower heads but the photos didn’t convince me –  the opening looked pretty small for my shower head. Another thing is that our shower head is relatively heavy it’s one of these multi-function shower massage shower heads and pretty solidly built. But this suction shower head holder is rated to hold up to 8 lb and my shower head definitely doesn’t weigh that -maybe a pound or two at the most.

When I got it delivered I wasn’t terribly impressed,  but it was pretty much what I expected for the price. It was a plastic piece with a large suction cup on the back and around adhesive backing. The actual installation was very simple.  After removing the screws from the existing shower head bracket I cleaned off the tile with some cleaner and then dried it completely.

After that, I stuck the adhesive backing onto the tile and made sure there weren’t any air bubbles. Just to be sure I pressed down pretty hard for about 30 seconds to make sure it was stuck to the wall.  Then I just placed the suction cup over the round adhesive pad and matched up the edges. Again I gave it a firm amount of pressure for about half a minute.

It’s been about 2 months since I put it up and to my surprise, it’s still up there! (shows I had pretty low expectations for these things). There are three of us in the house and we shower every day so it’s lasted through at least a hundred showers.  I actually didn’t think it would last this long and just assumed I would have to give in and drill no holes (after convincing my wife) and buy a “real” shower head holder (drilled into the wall, not suction cups).

The one thing we do as a precaution, rather than leave it supporting the heavy weight of the shower head 24/7  is that we leave the shower head leaning on the shower faucet. my thought was that over time the constant weight on the suction cup would put pressure on it and cause it to fall down.  I do notice that sometimes the ball that’s in the socket (that allows you to turn it left right and up and down) holds pretty well but does occasionally slide down a little bit. I think that’s to be expected with almost any of these kinds of plastic holders and really it’s not that bad,  I probably re-adjust it once a week.

All in all,  considering my low expectations when I bought it I’m pretty pleased especially considering it was pretty cheap and the worst-case scenario would have been just taking it off and either buy a different one or drilling a more permanent holder into the bathroom wall tiles.

Since I bought it I’ve actually seen a few other ones that look pretty decent, get good reviews and are maybe even a few dollars cheaper but realistically at this price, I don’t see the point of comparing price for a dollar two more or less.

There are some others (Discontinued) that seems to get slightly better reviews and ratings than the one I bought but the one thing that’s missing for me on that one is that the angle of the holder is fixed rather than a ball-and-socket like the one I bought.

The reason I really wanted the ability to move that angle is that I’m 6’4”,  my son is 6 foot and my wife is 5’2” so we’re constantly moving that angle up and down every time we take turns to shower.

Most of these holders are pretty similarly built if you look at the photos almost all of them have a 3-inch suction cup and adhesive backing the parts are mostly plastic.  The main difference between the different models seems to be whether or not they have a little hook at the bottom which I guess might be useful for hanging something light like a natural shower loofah or sponge (we never use the hook) and the other main difference as I mentioned before is whether or not the angle is fixed or 360°. So if you’re planning to buy one of these I think that’s probably the main thing to consider.

2021 – Just a quick update. The suction shower holder lasted about 2 years but finally dropped off the shower tile and wouldn’t hold up anymore. I didn’t want to epoxy it to the tile or use screws so I replaced it with this model. It has been up for over a year and works well. After several months it’s stopped holding up the showerhead. I assumed that the inner ball had lost its tension and was worn out but upon closer inspection, it just needed to be turned to tighten it again and is still working.

The main difference between the previous two models is the whole thing is metal, not plastic (the ball that the mount swivels, the support for the showerhead, and the mounting plate are all metal). 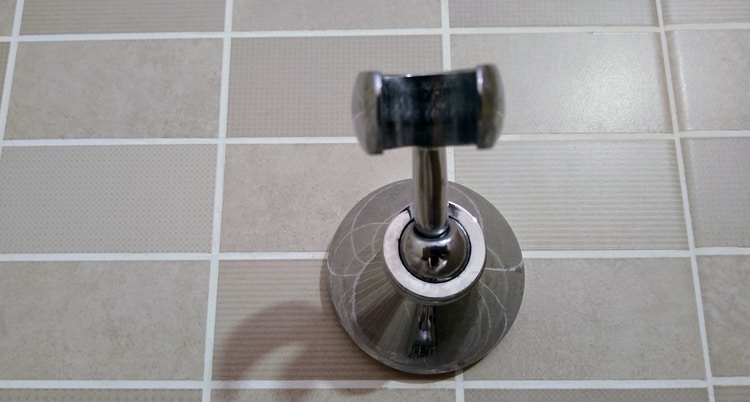 I  hope that was helpful if you have any questions let me know below in the comment.