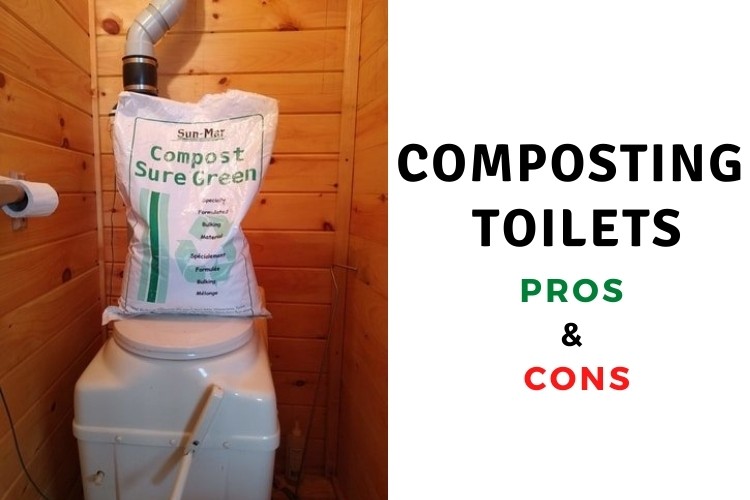 There are a lot of reasons to seek out environmentally-friendly changes in your life. Whether you’re concerned about climate change, the amount of water you use or you’re just trying to be fiscally responsible, reducing your footprint has its benefits.

Still, there are some costs, both economic and physical, that come with any such effort. Take, for instance, composting toilets. My parent started using composting toilets in the early 80s at our summer cabin in Northern MN. Our only other option up until then was a very primitive outhouse. Off-grid and on a steep and rocky piece of land, there was nowhere you could dig deep enough to have a septic system so the real option we had at the time for an indoor bathroom at the cabin was a composting toilet.

Having been the teenager, and lowest sibling in the pecking order, it was my task to clean the composting toilet so from personal experience I can say there are definitely a few disadvantages to them. However, to be fair – the other option was walking through the woods to an outhouse to go – so I also see the benefits these toilets bring to the table.

Composting toilets were created to work without water, using natural processes to eradicate human waste from a home. It’s a smart solution to a delicate matter that every household has to consider. There are a lot of good reasons to switch to a composting toilet, no matter your political concerns regarding the environment, but there are also a few downsides to the solution.

What Is A composting toilet?

Before discussing the pros and cons, let’s quickly review what a composting toilet is and how it works. Working the same as a compost pile or a traditional garden composter, a composting toilet reduces waste through natural processes, with waste products decomposing and evaporating. This is possible because human waste is mostly water, and what isn’t can be broken down and used as fertilizer.

Normally a good composting cover material or medium (peat, sawdust, etc) is used to absorb some of the liquids and mask the odor.

Perhaps the second most important component for a composting toilet is ventilation.

A ventilation shaft allows oxygen to enter the composting chamber so the organisms inside can survive. It also ensures that the noxious gases are released into the environment so that your house isn’t filled with a rancid stink.

Finally, there is an access point for you to be able to remove the waste material once it has been composted. This waste can be used as fertilizer for some plants, though you shouldn’t use it in your garden as there can still be some dangerous bacteria.

Depending on the model of composting toilet that you have, there can be additional components or steps involved, but what’s been discussed above are the essentials.

Even if you already have a traditional toilet and you’re thinking about switching to a composting toilet, the initial costs of installation will ultimately be offset by the amount you’ll save in water usage over the lifetime of the toilet.

On average, each flush of the toilet requires 1.6 gallons of water. Assuming you use the toilet even just two times a day, that’s well over 1000 gallons of water a year. A typical family would be four to five times that much, on the low end of estimates.

Regardless of how you feel about the validity of Climate Change concerns, leaving less of a personal footprint on the earth is a good philosophy. In addition to not unnecessarily using gallons of water, composting toilets result in a byproduct that can be used as natural manure. It just makes good sense, and it never hurts to be a little nicer to Mother Earth. Composting toilets are a great waterless toilet option for remote cabins and houses that don’t have plumbing or a septic system

Tiny houses have become very popular trends in the real estate world. Like other environmental-friendly choices, there are a variety of reasons for this, but the fact is, people are becoming more and more enamored with the idea of saving space and living with less. Another option is a good quality compact toilet.

Whether you’re looking to reduce the overall square footage of your home, or you’re just trying to make the most of a small bathroom, many composting toilets take up less space than traditional toilets as they don’t require separate sewage or septic system. This is also a benefit for remote living where sewage systems aren’t an option.

Composting Toilets Are Easy To Maintain

The great thing about composting toilets is that they are a bathroom fixture that doesn’t have a lot of working parts is that there are far fewer things that can go wrong. There are definitely maintenance requirements for a composting toilet, especially with emptying the chamber. Tip- one of the best ways to limit the amount of maintenance and cleaning is to get the composting cover material mix dialed in (click to see our top recommendation.

However, unlike a traditional toilet, a composting toilet doesn’t have plumbing that requires you to spend your weekend on the floor figuring out where the leak is coming from. In the 30+ years we’ve had composting toilets there have been relatively few problems after they were installed.

Composting Toilets Are Not Practical Everywhere

It’s true that composting toilets offer a lot of benefits in terms of cost and maintenance, but unfortunately for most people, they won’t be a realistic option. Composting toilets generally won’t work in urban, multifamily apartment complexes. There are only specific living environments where a composting toilet will be an option, and you’ll need to check with local code officials to make sure your home meets the requirements.

Composting Toilets Can Use Electricity

While it is true that composting toilets don’t use water, many of them do still require electricity. That is because the more advanced and efficient composting toilets have an electronic system that helps speed-up decomposition by turning the bin after each use. Some also need an electrical connection to run the ventilation fan.

(Some models like the Separett Villa 9200 are easily hooked to a 12v battery or solar power source which makes them more convenient as they do not require a 110-120V power supply.) That’s very useful, but it means that some of the financial savings and reduced environmental impact you had achieved by switching to a composting toilet will be offset by electrical costs.

There are non-electrical composting toilets, which eliminates this con. Unfortunately, without electricity, composting usually takes longer.

One of the reasons faster composition is good is that it means the waste is eliminated before any of its smells can seep back into your home. While all composting toilets are supposed to be built with odor-reduction in mind, some are better than others. If your toilet isn’t properly maintained or the composting chamber doesn’t sufficiently separate solid waste from liquid waste, you may start to notice an unpleasant smell, as will your guests. Again, as we mentioned below, having a good composting toilet cover material and maintaining the correct level of moisture limits odors and makes clean-up and maintenance much less of a hassle.

As with any major home decision, there will always be unforeseen outcomes that are specific to your home. No pros and cons list can ever hope to predict every possible outcome, but these are probably the most important factors to consider.

If, after considering the pros and cons, you’re leaning towards a composting toilet, make sure to do your due diligence regarding your specific home. If it all checks out, enjoy your brand new, environmentally-friendly bathroom.

If you’re not sure about a composting toilet, check out these other waterless toilet options.