The urinal is what differentiates a public men’s bathroom from a public women’s bathroom. The moment you step into a public bathroom and see one, you will know right away that you have just stepped into a men’s bathroom, and you can either go ahead and do your business or leave and step into the next bathroom.

Aside from being easy to identify, urinals are commonly used in public spaces due to their size. They do not consume a lot of space, and thus it’s possible to have a urinal on every wall of the bathroom. Aside from the fact that many can be placed inside a bathroom, their size also means more males can be accommodated in a single bathroom, allowing for less waiting time between users.

Despite the seemingly similar benefits of each model you’ve seen in your lifetime, not all urinals are alike. There are many different urinal types. Each type is highlighted below, along with their characteristics.

Behind the name of this particular type of urinal is the way it resembles a feeding trough. It’s an economical option in that one unit provides enough space to a maximum of eight men, and it only requires one plumbing connection. The drawback of this type of urinal, though, is that it is less private than an individual urinal.

This type of urinal is usually crafted out of stainless steel, though porcelain trough urinals exist.

This type of urinal is the most common type, and for good reason: regardless of shape or design, each bucket urinal is versatile. Most bucket urinals in the market are fashioned from porcelain, but they can also be made out of plastic, metal, and even polished wood.

It’s worth noting that some places have taken it to the literal extreme and installed actual buckets as urinals. These buckets-turned-urinals have their own drains and their own spouts.

This type of urinal has a drain which is located at foot level or below foot level. Users direct their streams against its backing surface, and gravity directs their streams to the floor, where the drain collects them.

This type of urinal comes in many variations, and sometimes, the design is called a slab urinal due to the big porcelain chunks used in fitting the urinal together. Every section is large, and every section shares a drain.

There are against-the-wall urinals out there in the market that are aesthetically pleasing. These are set up in very lavish bathrooms. Many others are simple. These are fashioned from porcelain.

Other Types of Urinals

Corner urinals are flat back urinals that are designed to fit a corner, hence making them a space-saving option.

Many bucket urinals nowadays are considered as flat back urinals. This type of urinal is meant to be affixed or screwed to a flat bathroom wall.

This is a type of urinal that you normally see in shopping malls and airports and for good reason. Since those places are frequented by people who are in a hurry, it makes a lot of sense to set up anything that helps save users’ time.

Sensor urinals are characterized by blinking or flashing sensors that detect human use. Once the sensor detects that the urinal is no longer used, the urinal flushes by itself.

A squatting urinal, as the name implies, is a urinal so short it’s almost a part of the floor it’s bolted on.

Also called a water-free urinal, waterless urinals basically are urinals designed to help a facility save water. They come in four types.

The first is the liquid sealant type, which makes use of liquid sealant cartridges to trap urine and its smell. The trapped liquid used in this type of waterless urinal has a specific gravity that’s lower than urine. This holds back urine and drains odors by staying on top and forming a barrier between the drain and the bowl of the urinal.

The third type of waterless urinal is one with membrane traps. These traps can be considered as one-way valves. When used, it opens in just one direction to let the urine flow through. It prevents the odor from the drain from going back into the urinal bowl.

The fourth type of waterless urinal is one that makes use of biological blocks. These blocks can be placed within a dome or in a pan so they can “feed” upon urine to block out its smell. Unlike other waterless urinals, this type of urinal needs a lot of cleaning, not to mention that each bio-block lasts about two hundred uses, thus needing to be replaced often.

As the name implies, this is a type of urinal that can be brought to any place where it’s needed. These are mostly used for travel but can also be used at home when someone is sick. Portable urinals for men look different from portable urinals for women.

Women’s urinals have become more popular in recent years. While at first they were not taken seriously and some considered them just a gag gift, they’ve become a reliable tool for women that go hiking and camping and can also be useful for concerts or events where porta-potties may not be the most hygienic. The urinal allows women to urinate standing up rather than having to sit on a public toilet seat.  One of the most popular brands is the GoGirl Female Urination Device seen here:

In terms of function, they are no different from the other types of urinals mentioned above. Where they differ is with their form–this type of urinal is designed so as to encourage children to use the urinal when nature calls.

These urinals have bright, colorful, and child-friendly designs for a fun urinal use experience for boys. 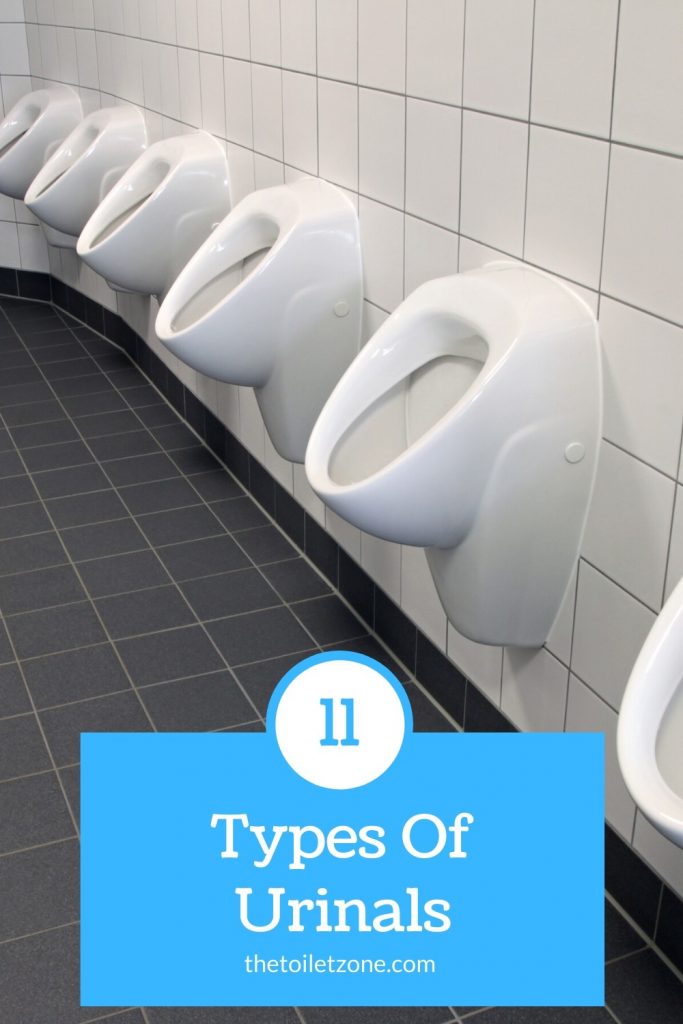