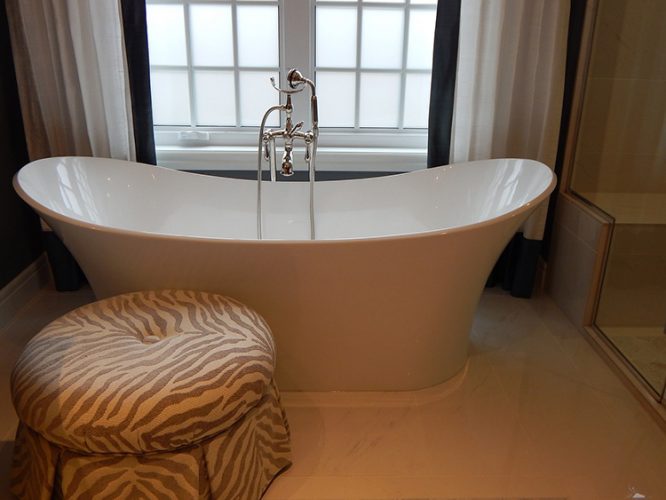 Cast iron and acrylic are two of the most common materials used in making bathtubs. Iron and acrylic are long-lasting but enameled cast iron models are considered the most durable. Acrylic is smooth and non-porous making it easy to clean and maintain but acrylic tubs are also prone to scratches. Acrylic is also affordable, lightweight making it easy to transport and install.

Cast iron is an alloy of iron that is composed of 2-4% carbon plus different amounts of manganese, silicon, phosphorus, and sulfur. It is made by reducing iron ore into liquid metal via a vertical shaft furnace called a blast furnace. The melted iron is cast into unrefined ingots called pigs which are then remelted with scrap and alloys to produce different products.

Cast iron is commonly gray or white in color. Gray cast iron has more silicon content and is easier to process through a machine compared to white cast iron. Cast iron is generally brittle but thanks to a prolonged heating method discovered in France during the 18th century, cast iron was made more malleable and allowed its use in a wider variety of industries and purposes.

When compared against other materials used for bathtub production, there is no question that enameled cast iron models are the most durable. Cast iron is thick and this thickness helps the bathtub retain water temperature longer which makes it perfect for those who often take warm baths. It is believed that cast iron can last several decades and can be restored by sanding the surface, filling in any cracks, applying a primer, and rebuffing the bathtub.

Because of the sturdy nature of cast iron, it is also very heavy and requires help when it comes to installation. It will take more than a pair of hands to move around the bathtub and will also need additional floor support especially when it will be installed on the second floor of your home. Since iron is a metal, it will rust if the enamel coating cracks or chips off. It is also very expensive compared to bathtubs made of different materials.

Acrylic is a tough and transparent plastic that is commonly used as an alternative to glass. It only weighs half as much as glass and is shatter-resistant making it a common material in making windows, aquarium tanks, bath enclosures, composite dental fillings, and outdoor signs. Its use can also be traced back to World War II when acrylic was used in the production of periscopes, gun turrets, and canopies.

Chemically speaking, acrylic is a synthetic plastic derived from acrylic acid, the most common of which is polymethyl methacrylate (PMMA) which is more popularly known under the brand names Plexiglass and Perspex. When heated to 100 degrees, acrylic can be molded into different shapes and holds its form once cooled. It can also be drilled, machined, or sawed like soft metals and woods and has a tensile strength of more than 10,000 pounds per square inch.

Acrylic bathtubs are a popular option because of their durability and versatility. Acrylic sheets are soft and malleable, allowing producers to make bathtubs in different shapes, sizes, and designs. These are also lightweight, making them easy to move around and install in the bathroom.

Bathtubs made of acrylic have a smooth and non-porous surface that is easy to clean and maintain. Acrylic is also able to retain heat for long periods of time, making it suitable for those who like to soak in the tub. Acrylic bathtubs are considered inexpensive but do cost more than fiberglass bathtubs.

Because acrylic is pliable in nature, the soft surface can get scratched easily. It is easy to repair any scratches though by filling it out or polishing the surface. While acrylic is sturdy in itself, it is less secure compared to other materials used for bathtubs and may require reinforcements of stress points when installing it. Acrylic bathtubs can be combined with fiberglass during production but this also makes them more expensive.

Deciding on whether to go with the cast iron or acrylic bathtub would depend on several factors. If you are after durability, enameled cast iron bathtubs are definitely better because of their solidness and track record when it comes to last for decades. When it comes to affordability, acrylic bathtubs are cheaper and offer great value at a lesser price. Both are capable of retaining the temperature of warm water and are easy to maintain too.

Bathtubs are a common bathroom fixture in today’s modern times but this container used to hold water for bathing has had a long and interesting history before it shaped how we know it now. While the term bathtub wasn’t used back then, similar water contained made for bathing was found in the Palace of Knossos in the Grecian island of Crete in 1700 BC. The tub was 5 feet long and made of pottery, believed to have been reserved for use by the rich during that time.

When it comes to modern bathtubs, their roots can be traced back to John Michael Kohler, founder of Kohler Co. In 1883, Kohler created the first bathtub by using a cast iron horse trough and adding four decorative feet to its bottom and applying a coat of enamel to the surface. The clawfoot tub became a status symbol in Europe in the 19th century, where only the rich and elite had access to such invention.

During the latter half of the 20th century, built-in tubs with an apron front were introduced which allowed easier maintenance of the bathtub. The same period marked the introduction of colored sanitary ware in the market, allowing homeowners to choose from more designs and led to the eventual decline in the demand for clawfoot-style bathtubs.

As the years progressed, bathtubs made of different materials also came out in the market, such as fiberglass, acrylic, stone, and ceramic. These materials differ in terms of affordability, ease of installation, ease of use, and durability and each has its own advantages and disadvantages. Today, two of the most common and popular materials used in making bathtubs include cast iron and acrylic. Both materials are considered long-lasting but here are some things you should know before deciding on the best option for your home.