In the United States, the bidet can be seen in a negative light. However, that attitude can be mostly attributed to a simple lack of knowledge. Bidets just seem like intriguing and slightly silly foreign devices that might show up in a hotel room in Europe or Japan.

Table of Contents Hide
1 Bidets Myths & Misconceptions
1.1 Bidet Installation Is Difficult
1.2 Bidets Are Only For Millennials
1.3 Bidets Are Too Expensive
1.4 Bidets Are Hard To Use
1.5 Bidets Waste Water
1.6 Bidets Are Uncomfortable
1.7 Bidets Don’t Get Tush Clean Enough
1.8 Conclusion

Yet a bidet is something that can fit into any home, and it’s not just for people who are modern treehuggers. It’s time for Americans today to learn about how this awesome system can improve the entire bathroom experience. Below are some common myths or misconceptions that might leave some folks confused about what a bidet is, who needs one, and how to have one at home.

One of the first thoughts that might come to mind at the mention of a bidet is that it’s difficult to install. After all, Americans have only really seen bidets in hotels room or maybe a public restroom in another country. They don’t know how to install one, or they might think that they need an entirely new fixture sitting in their bathroom.

While it’s true that some people have a toilet and then a separate bidet, most folks opt for attachments. A bidet attachment can hook up to the sink’s water supply and can sit on the side of the toilet. Some bidets are a handheld hose while others work at just the push of a button. Setup takes just minutes.

Bidets Are Only For Millennials

Yes, it’s easy to write off the humble bidet as one of those fancy things that all the younger people are using these days or a temporary fad coming from Europe.

However, bidets have been around for much longer than millennials have. While it is true that the younger generations may be more open to trying out this device, it’s not something that’s reserved for a specific age group. Bidets are for everyone; in fact, they make it much easier for elderly people to use the bathroom on their own.

Bidets can save time and effort in the bathroom and give seniors their dignity back because they won’t need an in-home care assistant to help them.

Bidets Are Too Expensive

Another misconception is that bidets are When Americans see something from another country, it’s only natural to assume that it costs loads of money. That isn’t the case with bidets though. They’re available right here in the United States and US companies are now making bidets. Many decent bidet toilet seat attachments cost less than $50.

Considering that the average American uses 3 rolls of Toilet Paper each week! It’s not hard to imagine how much money is being spent on it annually. More than $50, that’s for sure! An affordable bidet option is available for everyone, and the installation process is so simple that they won’t have to hire someone to attach it to the toilet. That’s a win-win.

Bidets Are Hard To Use

Of course, it would seem difficult to put one to use, but that’s just because it’s a new concept. The truth is, bidets are so easy to use that everyone from toddlers to old people uses them every day.

It’s one of those things that, once people try it, they can’t imagine going back. Yes, it seems weird to spray water down there, but it’s actually nice to know that the water is making it cleaner and washing away residue and bacteria. These are things that toilet paper can’t do.

This is another myth that lots of people will easily buy into. The truth, however, is that bidets don’t waste water, and they definitely won’t use more water than a household that sticks to using toilet paper.

It takes several dozen gallons of water to produce a single roll of toilet paper. Conversely, a one-minute wash with a bidet uses one-tenth of a gallon of water. Moreover, a bidet can be a more eco-friendly solution than constantly using toilet paper, flushing it, and throwing away the packaging. Overall, the bidet can save money and reduce a person’s environmental impact.

As long as a person uses a bidet the ways it’s meant to be used, it won’t be uncomfortable. There are even bidet attachment models that allow the user to control the pressure and temperature of the water. This can create the ideal conditions for a bidet washing. Even without those fancy options, a bidet is hooked up to the home’s tap water supply.

Therefore, the water shouldn’t be super cold or hot; it’s at room temperature, which actually feels pretty good after sitting on a toilet. Plus, the gentleness of a bidet is enough for young kids and senior citizens to use one.

Some people imagine that when they use a bidet, they’re spraying dirty water from the toilet onto their bum. This is a gross misunderstanding though. Bidets actually wash away more fecal matter and bacteria than dry toilet paper. Click here to read more about why bidets are actually more sanitary than toilet paper.

In fact, that toilet paper (even the soft cushy kind) can end up crumbling and leaving bits of residue on the booty. Some say that bidets often get associated with the word “dirty” because of American soldiers during World War II.

These men most likely saw bidets when they went to see French prostitutes. That was probably their first and only time seeing a bidet, so it became linked to the “dirty” environment of a brothel.

This guide hopefully was a myth-busting experience that opened up a whole new way to look at bidets. Maybe it still feels like a foreign concept, but any fear or discomfort should dissipate. Bidets have been widely used around the world for decades.

While they’re not a requirement for better health, it seems that a gentle washing can provide more health benefits than a wipe of some scratchy paper.

Besides the potential for better health and wellbeing, bidets are better for the planet. They can even lead to fewer plumbing problems thanks to less toilet paper going down the drain. Consider all of these positives before writing off a bidet for good! 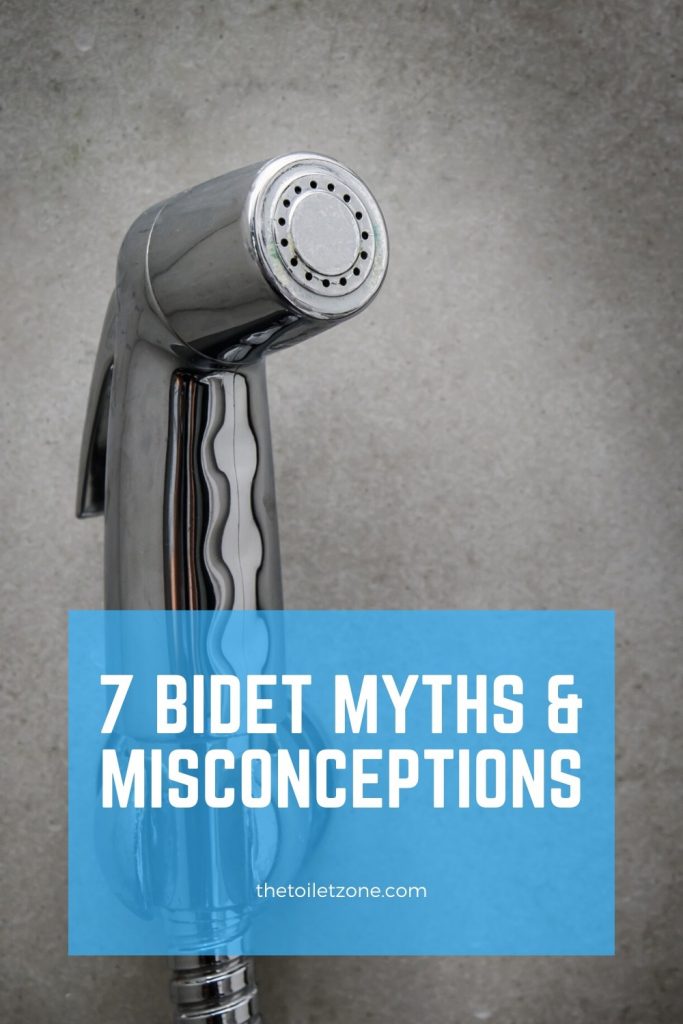