If you live in a rural area or are removed from the centralized sewage systems of a city, you probably own a septic tank. Though fewer households rely on septic tanks, there are still millions of homes throughout the United States that use septic systems.

Septic systems are tremendously helpful, but unfortunately, they can also be the cause of quite a few headaches compared to using a city sewer system. If not properly maintained, septic tanks clog or break down completely.

This can lead to everything from a terrible smell seeping into your home to pollutants spilling onto your property. For this reason, households with septic tanks need to be careful about what they put down their drains.

One thing experts have generally warned homeowners is, if they have septic systems, they should not use garbage disposals.

This has been an accepted rule for decades, so it might come as a pleasant surprise to septic tank owners that there is at least one company offering garbage disposals designed specifically for use with septic systems.

How does a septic system work?

Septic systems consist of two main components, the septic tank and the drain field. When waste drains to the septic tank, the tank separates oils and grease from solids as well as organic matter. When these three waste components are separated, what is left over is called wastewater.

The oils and grease float to the top of the septic tank, while the solids sink to the bottom. After some time, both of these components decompose with the help of bacteria inside the septic tank. Meanwhile, the wastewater is drained through pipes into the drain field where it enters the soil or a surface water system.

As long as the septic tank isn’t overtaxed, it’s an efficient and environmentally friendly system.

What’s the deal with garbage disposals and septic systems? 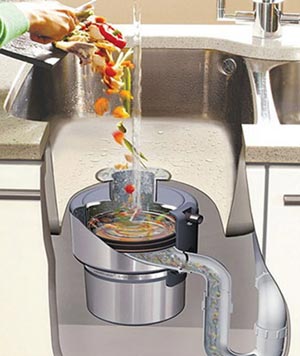 A septic tank is designed to predominantly handle bathroom or basic kitchen waste. Septic tanks can break down solid waste, but only up to a point.

With the advent of garbage disposals, people started sending more and more solid waste through their pipes to the septic tank, treating their disposals like trash bins. Sure, the disposals chop up that waste, but those smaller bits of food and other trash still have to be taken care of by the tank.

The more solid waste enters the tank, the longer it takes for that waste to decompose. As a result, septic tanks require manual draining much more frequently. This excess of solid waste can also result in the tank overflowing and flooding the yard. Nobody enjoys that.

What’s the alternative to a garbage disposal?

If you own a septic tank, you probably find it incredibly frustrating to not be able to use a garbage disposal. As I said above, though, the issue isn’t the garbage disposal itself, but the overuse of it. If you are judicious about what you put down the disposal, you should be fine. 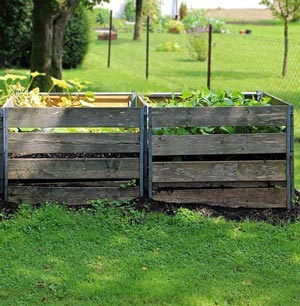 The best alternative to throwing loads of food down your drain is to compost all organic material, such as composting your coffee grounds as we’ve talked about here. Lots of families and offices have started to embrace the composting movement, both because it saves money in the long run and because it’s good for the environment. It’s a little bit more work, but if you’re already a person who recycles, adding a compost bin is just one small extra step.

Of course, the simplest option is to throw large food waste and soiled paper products in the trash. If you have a plate full of food scraps, scrape that into the trash before washing your dishes.

This is how households have done it for generations, and it’s a perfectly efficient way of cleaning up your mess without clogging your septic tank.

With all that said, you very well might be asking, “Why hasn’t someone developed a garbage disposal that works with septic tanks?”

Well, the answer to that is, someone has.

Insinkerator has been one of the leaders in the disposal industry for nearly a century, and they continue to innovate. They recently began selling a collection of garbage disposal products specifically with septic systems in mind.

The Bio-Charge system uses a special enzyme to help break down food and other waste that goes into the garbage disposal. These enzymes start decomposing the solids before they get to the septic system so the extra solid waste doesn’t clog your tank. The enzymes don’t harm your septic tank and they are held in a separate cartridge that only needs to be replaced once every four months or so.

This eliminates the need to buy septic system treatments, tank enzymes or whip up your own batch of DIY septic tank activator since the Bio-charge delivers it automatically with every use.

Insinkerator is changing the game

If you are one of the 21 million households in the U.S. with a septic system, you will definitely want to consider one of the Insinkerator garbage disposal models.

Insinkerator’s Evolution line of garbage disposals is some of the best on the market.

Their septic-friendly product is the Evolution Septic Assist Garbage Disposal. It combines the companies historically excellent disposal system with a unique cartridge system “the Bio-Charge Injection”.

This technology was developed by the company to automatically inject millions of enzyme-producing microorganisms every time the Septic Assist is used to help break down food waste.

The liquid also has a citrus scent to help control odors from the sink (i.e. stinky egg smell coming from the drain).

It has a 40 oz. chamber for waste and is much quieter than most standard disposals.

What really makes the Evolution Septic Assist such a great addition to your kitchen is that its installation and maintenance are very simple, especially compared to the effort it takes to clean or fix a septic tank.

Even if you’re a diehard composter and don’t need your garbage disposal to be septic tank-safe, Insinkerator still offers some of the best products on the market. Whether you’re going with the super quiet, standard Evolution Excel Garbage Disposal, or you need the Evolution Compact Garbage Disposal for a small kitchen, you’ll surely be impressed with their quality. You can check out the whole Insinkerator’s Evolution line of garbage disposals here.

So don’t fret, septic tanks owners, you no longer have to worry about your family throwing their uneaten dinner down the garbage disposal. If you need help getting your kids to eat their broccoli, though, you’re going to have to look somewhere else.

Other things that can help maintain a healthy level of natural bacteria in your septic tank (that breaks down the waste) is to use septic-safe toilet bowl cleaners and other household supplies like plant-based laundry detergent that won’t have a negative effect on your holding tank.

*We did have one reader (from Michigan) tell us that their local inspector said they could not have any garbage disposal installed regardless if it was specifically designed to work with septic. I have not heard of other people having this problem but you might want to check with your local country health board or whoever your local authority is that regulates septic systems.

When we had ours installed (Minnesota), they did a general walk-through of the property to see the number of toilets/washing machines, showers, etc to calculate the minimum tank capacity in gallons we would need to be up to code but did not mention that we could not have a garbage disposal…but to be safe you might want to check.

Also when they come back to renew the permit for the septic every few years they just inspect the septic system itself (pumps, holding tank, drainage field), they don’t come in the house, so not sure how they would even know if we had a garbage disposal).

Some recent research shows that there are over 21 million houses in the US on septic systems and with the increasing popularity of tiny homes, off-grid living and people looking to move further out due to urban sprawl in some cities, more people are living with a septic system for the first time and research what they can and cannot do and what shouldn’t go in a septic tank.

If you’d like to learn more about the InSinkErator and the company you can see their septic safe disposal on their site here.