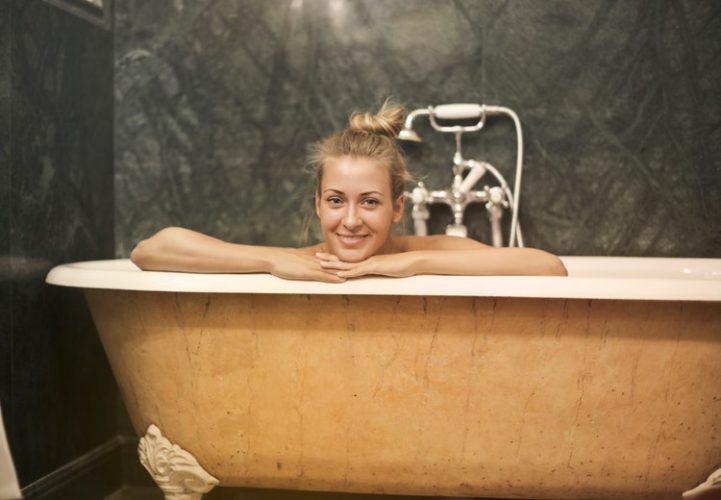 While there is evidence of indoor plumbing going back to 3,000 BC and a tub made of pottery found on the island of Crete dating to 1,000 BC, which is believed to be used by royalty for bathing, we can trace the modern bathtub’s roots back to John Michael Kohler.   In 1883, he used a cast iron horse trough, added four decorative feet at the bottom, and covered the tub with an enamel coating to produce the first bathtub.

Kohler’s model served as the basis for the clawfoot tub, which became popular during the latter part of the 19th century among the aristocratic population. During that time, bathtubs were made of cast iron, a durable material that lasts decades but is also very heavy.

Over time, bathtubs’ design, size, and shape evolved and became more creative, with different materials being used too to make tubs more affordable to the general public. There are many options, including lighter and more affordable ones – acrylic tubs are now some of the most common.

Having a bathtub at home has many benefits for one’s health. Soaking in a warm bath is believed to have therapeutic effects on the body, including lowering blood pressure, boosting the immune system, and improving sleep quality.

There are several different kinds of bathtubs on the market, but here we take a broader look at some of the best bathtub manufacturers to consider to make sure your bathing experience is a pleasant one. We also give you a list of online options to compare prices for each brand.

While many other brands are on the market, and this is not a complete list, it should give you a good starting point to research your next tub. These are well-respected manufacturers known for quality products, a long history of design, and overall customer satisfaction.

Kohler Co. was founded in 1873 by John Michael Kohler. It is an American manufacturing company based in Wisconsin, famous primarily for its plumbing products and bath and kitchen fixtures. Apart from plumbing, Kohler also produces tiles, engines, furniture, and generators.

Kohler produces the traditional cast iron bathtubs, one of the few companies in the US that still do, but they make custom work too. They produce for both commercial and residential applications, and their bathtubs come in a variety of installations. Kohler is known for integrating technology into its products. The Kohler Konnect product line is different from smart-connected plumbing fixtures for bathtubs, toilets, and more with WiFi capability and voice-assisted control.

The company has partnered with EPA’s WaterSense Program since 2007, a certification that ensures their products save billions of gallons of water per year and cut down on carbon dioxide emissions and water & energy costs. Kohler also received the first WaterSense Manufacturing Partner of the Year Award in 2008. In 2017, the company also received the Ray Anderson Radical Industrialism Award for its commitment to reducing the impact of its manufacturing processes on the environment and observing social responsibility.

Where to buy Kohler tubs:

Kingston Brass was founded in 1998 by a group of industry professionals in California. The company started as an importer of bathroom and kitchen products made in Asia, selling various products under different brand names, including Kingston Brass, Gourmetier, and Fauceture. The company started with just a few hundred products in its inventory, but over the past two decades, it has broadened its range to 20,000 products. Their primary mission is to provide high-quality, cost-effective products in the plumbing industry.

Among the most popular collections in their list of products is the Aqua Eden Collection, which consists of bathtubs in different styles. From clawfoot to freestanding, alcove, and pedestal design, the collection also incorporates modern and classical designs using various bathtub materials such as acrylic, cast iron, and solid surface.

Where to buy Kingston Brass Tubs:

American Standard produces bathtubs that cater to different users and purposes, from kids to adults, from washing pets to soaking in. Their bathtubs also come in a wide range of styles and installments to suit different bathroom designs and sizes.

Today, American Standard produces bathroom faucets, bidet toilet seats, sinks, and toilets apart from bathtubs. They also manufacture bathroom and kitchen faucets, showers, toilets, and sinks for commercial purposes. American Standard produces ADA-compliant products for both kitchen and bath. In 2019, the company received one of the 25 WaterSense Sustained Excellence Awards for its innovation in its WaterSense-certified products.

Where to buy American Standard Bathtubs:

Aquatica was founded in 2003 in Canada, but it wasn’t until two years later that the brand was registered in the United States. Under a collaboration between Wolseley in Canada and FERGUSON in the USA, the two brands formed an agreement between two major wholesale suppliers of residential and commercial plumbing supplies. In 2011, Aquatica refreshed its portfolio of products with stone and high-end acrylic bathtubs manufactured in the EU, gaining a foothold in the premium niche.

In 2013, the company opened its first online store in England after significant investment and expansion in R&D to produce patented materials. They also worked with renowned European designers to produce innovations in design, product engineering, and production techniques.

Today, the company is synonymous with the bathtubs they produce, particularly tubs for soaking in. Aquatica’s soaking tubs are created with more space for relaxing and stretching, considering the interior tub’s design and placement of taps, drains, and pipes for a luxurious experience. In 2016, Aquatica won “The Best Innovative Material of the Year” at the Kitchen and Bathroom Awards for their AquateX material.

Duravit was founded in 1817 by Georg Friedrich Horn. With headquarters in Hornberg, Germany, it started as an earthenware factory, and it wasn’t until 1842 that the company expanded to include sanitaryware in its range of products. During the first 150 years of the company, the main focus was on the quality of the ceramics being produced. By the 1980s, they have shifted their focus to include design as an integral part of their operations.

Duravit worked with Dieter Sieger to create the first designer range for their bathroom products. Later on, they completely revolutionized the sanitaryware industry with the first complete designer bathroom in collaboration with Philippe Starck. After launching in 1994, numerous renowned designers have worked on various collections with Duravit.

Duravit produces products for bathing, showering, washing, and toileting. They are best known for their bold designs and designer collections and have won several awards, including the Best of Best Award in the 2015 Iconic Awards.

Wyndham Collection is custom-designed especially for Modern Bathroom by Christopher Grubb, a well-known interior designer and contributor on HGTV from Beverly Hills. It is also distributed under the same company. On May 20, 2004, Modern Bathroom was founded by Martin Symes as a manufacturer and retailer of bathroom fixtures and accessories in California. Symes is the current CEO and president of the company, and aside from distributing Wyndham Collection, they also carry other brands such as Kohler, Toto, and Fairmont.

The Wyndham Collection bathtubs combine traditional and modern aesthetics in their products. Christopher Grubb has been touted as an expert design influencer and a style maker by producers, manufacturers, clients, and editors, and it shows with the bathtub designs from the brand.

Apart from bathtubs, the Wyndham Collection also have bathroom vanities and storage units such as linen towers, shelf units, and side cabinet. These also feature Grubb’s design and style, blending classic and contemporary. Grubb is the recipient of numerous design awards, including 2018 Build Magazine Health and Beauty Designers of the Year and KBDN’s Top 50 Innovators in Kitchen and Bath Design.

Where to buy Wyndham Collection Bathtubs:

ANZZI Design Group is under Spa World Corporation (SWCORP), a manufacturer of bath products established in 2005 that provide home luxury brand bathtubs and fixtures in the US. ANZZI focuses on producing a wide range of home hardware and fixtures based on current trends, giving artisan designs in various sizes, styles, and shapes. Apart from ANZZI, SWCORP also produces medical walk-in tubs under the brand name Meditub and steam bath generators under Steam Spa. The company also has drop-in whirlpool bathtubs under the brand name Atlantis Whirlpools.

Where to buy Anzzi Bathtubs:

TOTO Ltd is the largest toilet manufacturer in the world. Founded in 1917, the brand got its name from the abbreviation of Tōyō Tōki, which means oriental ceramics when translated. Based in Kitakyushu, Japan, TOTO is famous for developing the Washlet, the company’s line of cleaning toilet seats. It wasn’t until 1989 that TOTO entered the US market with its toilets, but now, it has become one of the most popular brands for plumbing products for residential and commercial purposes.

TOTO’s range of products includes bathtubs, toilets, faucets, showers, bidets, seats, and washlets. Their products have different certifications, including WaterSense, ADA, CalGreen, and California Proposition 65. The brand also won the Red Dot Award for the product design of its freestanding flotation tub in 2020 iF Design Award.

Where to buy TOTO Tubs:

Woodbridge Bath is a supplier and distributor of bath and kitchen items under the same brand in Cerritos, California. The brand prides itself on supplying high-quality products at affordable prices. The company doesn’t go through any middlemen when providing their products, eliminating the additional costs of mark-up prices. Woodbridge Bath products come in 1-year, 5-year, and lifetime warranty depending on the product and its parts.

Now known as one of the largest distributors of bathroom, kitchen, and flooring products in the United States, customers have the option of placing their orders online or by visiting their showroom, which is open to the public. Woodbridge Bath supplies toilets, sinks, bathtubs, bidets, vanities, showers, and faucets for bathrooms. The company makes faucets, sinks, and countertops for its kitchen products.

Where to buy Woodbridge Bathtubs:

OVE Decors is a family-owned company from Montreal, Quebec, Canada. Launching with bathroom vanity products, the team expanded into bath products, including bathtubs and shower enclosures in 2006. By 2016, OVE Decors managed to sell one shower every 9 minutes in North America. At present, OVE Decors offer bath, lighting, and outdoor furniture to homeowners in the US and Canada that are high-end design-wise and DIY-friendly.

When it comes to their bathtubs, they have freestanding tubs, air tubs, and clawfoot tubs. In terms of color, apart from the usual white bathtubs available in the market, OVE Decors have bathtubs that are black outside and white on the inside.

Where to buy OVE Decors Tubs: