It’s not unusual to think that bidets are gross, unnecessary appliances that are found in many European bathrooms.

Table of Contents Hide
1 Bidets Are Cleaner Than You Think
2 Using a Bidet
3 Thinking About Purchasing a Bidet?

However, a lack of information can cause Americans to poo-poo bidets when in actuality they can provide a deeper clean. It’s time to set the record straight on how bidets can help to keep people cleaning after going to the bathroom. It may be surprising to hear some common misconceptions dispelled, so read on to learn more about this intriguing bathroom companion.

Bidets Are Cleaner Than You Think

Some people may assume that when using a bidet, the water gets sprayed everywhere, causing an even bigger mess than the one they’re trying to clean. The truth, however, is that bidets release a bit of water, not an oncoming jet spray.

In fact, there are several models out there that allow the user to adjust the water pressure so that they’re comfortable with the amount of water coming out of the bidet. For those who haven’t used one before, it’s easy to imagine an awkward experience, but it really is simple to use a bidet. Modern attachments and technology make everything even easier.

Some might suspect that that water is coming from the dirty toilet bowl. This is another common misconception about bidets. The water that sprays from a bidet is not coming from the toilet; it comes from the tap. Bidets and bidet toilet seat attachments have a hose that the user simply has to hook up to the sink’s water source.

This way, the water that comes out of the appliance is the same water that a person uses to wash their hands. No dirty, contaminated toilet water here! Plus, if an individual chooses to purchase an electric model, they will be able to adjust the temperature of the water, providing a more comfortable and even sanitary experience.

Be careful with using soap. It makes sense to think that soap is necessary, especially since people wash their hands with soap and water. Yet a person’s private areas are much more sensitive than their hands. Harsh soaps are abrasive and can end up doing more harm than good. Using these soaps on the private parts can lead to a drying out of the mucosal lining.

This could lead to inflammation, pain, and infection. On the other hand, water is also to wash away fecal residue and bacteria, resulting in a cleaner hiney than using toilet paper alone. It should be noted that some people prefer to use a gentle soap, which can work, too.

A spray of water does a much better job of washing away bacteria and residue than toilet paper. It can be hard to believe at first, but one use will prove it. One way to think of it is if a person tried to wash their hands with just a paper towel or napkin. They wouldn’t get much dirt off, would they? Or, what if they were hopping in the shower after a good workout.

Instead of turning on the water, they instead rubbed toilet paper on themselves to get clean. It’s not very effective, is it? That’s why individuals prefer to use bidets. The water does a much better job of washing away the things that shouldn’t be there without leaving bits and pieces of toilet paper behind.

Plus, there are different ways to use a bidet. It depends on the individual. Some people will go to the bathroom and then use the bidet to clean away the mess. Then they might have an air dryer on the bidet attachment, or they will use a towel to pat the area dry.

Other folks actually use toilet paper initially to get a surface clean, then they use the bidet to get a deeper, more refreshing clean. They will then use a towel to pat dry. Regardless of the method, the vast majority of bidet users agree that the appliance gives them a much cleaner tush than using toilet paper alone.

In general, women are probably more likely to use a bidet, especially after delivering a child or during their menstruation. The bidet ensures that their pH levels down there are balanced and that any residue or debris from menstruating is cleared away. That being said, men can get just as much benefit from a bidet as women can. 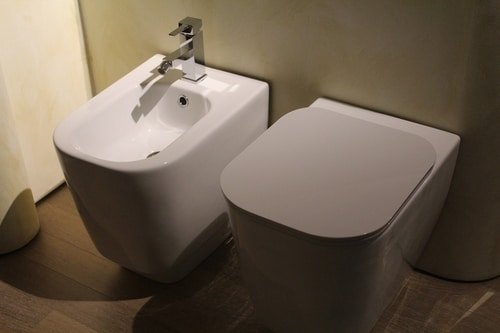 A bidet ensures a more thorough clean in the genital area, which can prevent men (and women) from spreading harmful pathogens during human contact or intercourse. Men need to be just as careful as women when it comes to keeping things neat and tidy down there.

Thinking About Purchasing a Bidet?

It’s normal to worry about a bidet getting dirty, but there are also self-cleaning models available from many retailers. Think about it: toilets themselves can get dirty, too. That’s why families clean out the bathroom on a weekly basis.

The same principle applies to a bidet. Besides, those self-cleaning types are super convenient and can make users even more confident in their bidet purchase. For those worried about accidentally peeing on the bidet sprayer itself, there are options to get around that.

Some bidet attachments actually sense when someone is using the toilet, so they’ll retract the sprayer while they go. Others can attach a handheld hose that people can use to direct the water exactly where they want it. Folks have been using bidets for decades, and they haven’t complained about it being dirty, so no worries.

This guide should have lifted the veil a bit more on what exactly a bidet does and how it can improve the overall bathroom experience.

While many Americans won’t be rushing to purchase a standalone bidet or bidet toilet seat attachment any time soon, hopefully, this information provided a new lens through which to see bidets. Perhaps if they’re ever in a place where a bidet is present, they won’t be afraid to give it a try. Remember, these appliances are sanitary, safe, and can even make washing up more enjoyable.