Whether you like it or not, toilets, lavatory, privy (and a lot more, I promise!) at every nook of the world, would be something that you’ll be looking for. And to some, it would be a really serious matter. And if you’ll be traveling from America to Europe, or the other way around, you’ll be in for a surprise. So before you take off, here are the major differences to help you with your overseas escapade!

The Differences Between American and European Toilets

American restrooms have mounted toilet paper dispensers for everyone to clean themselves once they are done and Americans go through more toilet paper than anyone in the world.

Another thing to note about toilet paper is that many public toilets in Europe, especially Spain and Italy lack toilet paper – rarely an issue you’ll encounter in US public bathrooms. It’s a good idea to carry a small packet of tissues with you when traveling in Europe so you don’t find yourself left squatting with nothing to clean up with.

American toilets have a single handle that is used for flushing. As for the European version, toilets feature a dual-flush. In a dual-flush system, the toilets have two flushing methods: partial flush and full flush. The partial flush is used when you only need flush down liquid waste, while the full flush is used for removing solid waste products. Many are designed with a push button that can be partially depressed (half the button goes down or the full push). On many European toilets, you can also press the button to start the flush and press a second time mid-flush to stop it. The dual flush system is said to be helpful in the conservation of water.

All modern toilet flushes work by using a forceful amount of rushing water to push waste products out to city sewer system or a rural septic system. If you think that all toilets flush the same way, then you’ve been wrong your whole life, because the fact is, they don’t. Not to the Americans and Europeans at least, the former using the siphonic flushing system and the latter using the washdown one.

American toilets usually have a long and narrow reverse ‘S’ or ‘P’ trap way with one end as the opening in the bowl, and the other end connected to the drain pipe which is underneath the bowl, and what leads to the sewer. This design is technically meant to create a siphoning action when flushing. The siphon is so strong that waste products, no matter how heavy, get ‘siphoned’ out with the water. At the end of the flush, you can hear a gurgling sound while the bowl is filled again with water, all ready for the next flush.

European toilets, on the other hand, use the washdown flushing system. It uses the weight and gravitational flow of water from the tank to flush out the waste products from the toilet bowl. Simply put, wastes are push out by extreme pressure of the water from the tank. The toilet is also designed to have a short and wide trap way, usually, twice the size compared to a siphoning toilet, which allows waste and water to exit the bowl with ease. The washdown toilets are relatively clogged free.

American toilets have the standard toilet bowl and urinal in restrooms, but it’s a different story for European lavatories which have a few and interesting options. First, squat toilets which are found in the eastern and southern parts of Europe, are basically holes in the floor that may be covered by a flat material for your feet. Instead of sitting, the ‘user’ needs to squat over the hole while going for a nature break. Some modern squat toilets have flushing capabilities, while others, especially for small European villages or residential area, you need to use the water and bucket technique.

As for the urinals, American restrooms have urinals in rows and are divided by privacy partitions. European lavatories, on the other hand, do not have individual urinals. Instead, trough-style urinals are the popular and common fixtures that can accommodate several men at once without partitions and with just one drain. It can save and lessen water consumption, but definitely, it is something that not all people, particularly tourists will be comfortable.

If anything that sets the difference between the American and European toilets based on aesthetics, then these are the ‘spaces’ or the partitions that divide each toilet bowl from each other. The partitions in the American toilets will give you a nice deal of privacy, but with reservations. Each partition has an exposed foot and top, and gaps or sight lines between the toilet stall doors and the frame.

In 2015, Robin Edds from BuzzFeed even wrote an article as to why there are huge gaps at the edge of the toilet doors in America. He included in the article some funny tweets and Instagram posts from various people who are complaining and feeling uncomfortable about these huge gaps. Near the end of his article, he posted a picture of a cubicle in Britain with a tag line, ‘Beautiful, beautiful isolation’, because at the opposite end of the style spectrum, European toilets offer exceptional privacy with their fully enclosed stalls.

While most, if not all, public American toilets are free, this is not the case for European toilets. In some European countries, bigger and major cities usually have coin-operated toilets along the streets which are generally more sanitary. Moreover, many public restrooms also charge a few coins for their services especially if there is an attendant with a tip jar.

Now that you are equipped with the knowledge of the major differences between the American restroom and the European lavatory, you are now prepared to take your journey and vacation without any bathroom dilemma!

If you loved this post, you’ll also enjoy our article on 40 amazing facts about toilet paper! Who knew we knew so little about something we use daily?

Got your own American or European toilet stories to share? Don’t hold back – feel free to share your experiences and comments in the section below! We are eager to hear from you! 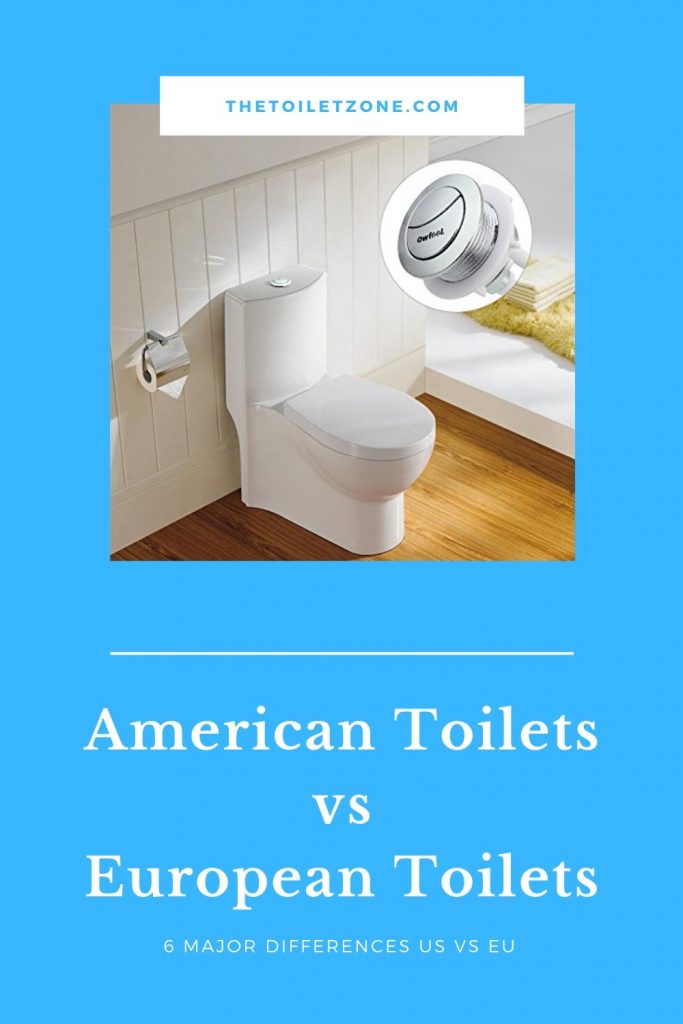